"Lacecap" and "mophead" are two terms you hear a lot when it comes to hydrangeas, but they don't refer to a specific type of hydrangea at all. They actually describe two possible arrangements of the flowers of a hydrangea. Let's look closer at the forms that hydrangea flowers take to understand the concept:

What's commonly referred to as a hydrangea's flower is technically known as an inflorescence, a superstructure comprised of multiple smaller florets. These florets can be two different types: fertile and sterile. As the name implies, the fertile florets are full of pollen and nectar, and are capable of developing seed. They are smaller, and distinctively star-like, and when fully open, the stamens and pistil(s) can be clearly seen: 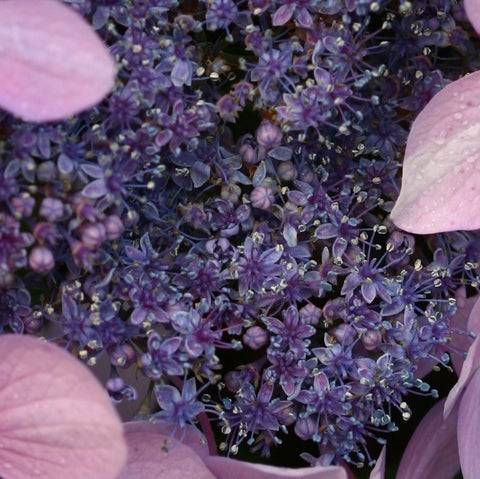 The sterile florets are much larger and showier. They often have a rather leathery or papery feel, and usually have a little bead-like dot in their center that may or may not develop into a fertile floret, depending on the variety: 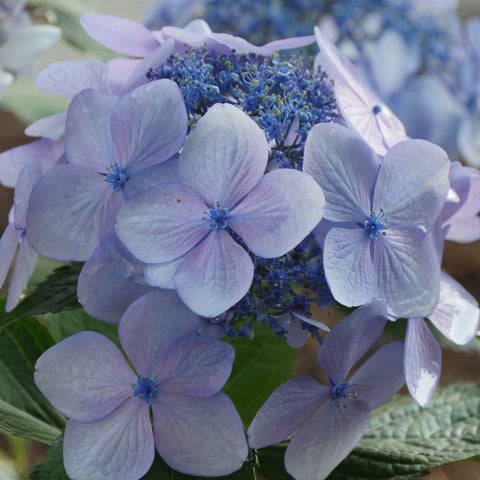 In the wild, nearly all hydrangeas display a lacecap form, with few, if any stertile florets. Why? Because in nature, a hydrangea only flowers to set seed and reproduce itself, which occurs primarily in the fertile florets. The larger sterile florets help attract insect pollinators to the inner fertile florets, but they take a lot more energy to produce, so the plant only creates a few of them. However, when people started noticing hydrangeas many centuries ago, they began selecting them to take on more and more of the showier sterile florets, and we now have mophead hydrangeas.

Though many people use the term "mophead" to refer to bigleaf hydrangeas in general, the fact is that all main types of hydrangeas - panicle, smooth, oakleaf, and bigleaf - may be either a mophead or a lacecap. At present, there are no truly mophead climbing hydrangea, false hydrangea vine, or mountain hydrangeas, but it's really just a matter of time until some intrepid plant breeder manages to bring the flower power to these species too.